I am stepping out of my cocoon, and with lots of support I can dance with life.

To me, the various projects, like 'The Dance of Life' animation, the 'Reflection' Puppets, were about dancing again.
I literally meant Dancing! As in, moving one's limbs, freely. Standing on both legs, or even one leg, while graciously moving the other. Moving my arms, at will.

I truly and utterly believed that.
No one could have convinced me that the story of my work would have a very different meaning. 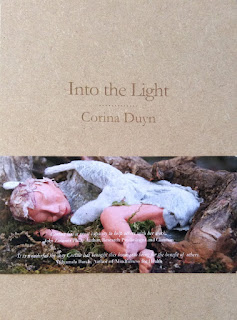 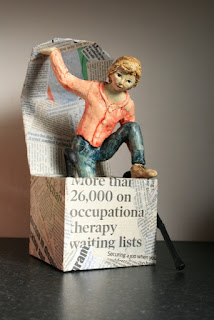 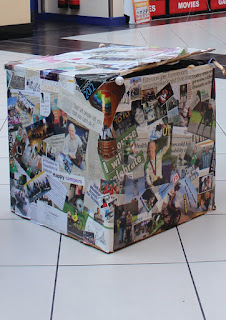 In September 2014 I was at Annagmakerrig, the Artist retreat-workplace.
An observations made by one of the other artists was that a lot of my artwork had figures in enclosed spaces. Eggs, Cocoons, Boxes...

I can only now see what has happened since then.


This residency was the start of Into the Light. At the start it was to be a book of essays on life with illness/disability. My health did not allow me to complete the work as intended. After many trials and almost giving up, I created a series of loose sheets, and gathered them in a box.

At the same time of deciding on the book-in-a-box, I created the small sculpture 'Stepping out of the Box' (I honestly did not see the connection for months, maybe even a year).

This small box, became the template for the Life Outside the Box  Puppet Project I facilitated with my then fellow members of the Irish Wheelchair Association, during 2015/6.

I can now see that these boxes were there to step out of.
To take my place in society again. To be heard. To be seen.
I have been put into boxes for far too long.
And I probably also created a space (a box, a cocoon) in which I felt safe and could function. Function within the limits of what M.E. has dictated in my life for almost two decades now.

The Life Outside the Box puppet project led to the invitation to talk about my work at symposiums, universities and festivals. It lead to being confident to teach again, which I now do in my studio and via distant learning. 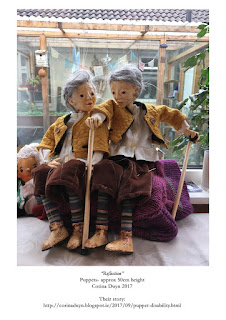 The Reflection Puppets also came about from that residency at Annaghmakerrig.
Four years in the making, but they are done! Just the short film to be created: One of the puppets, faces her reflection in the mirror. She is standing with her walking sticks, but wants to see the dancer in her.

Two years ago I started the Dance of Life animation figures. The idea again being based on dancing. On freedom, on being able to move...

But.
My health is far from allowing me to move freely.
My ability to move is more and more curtailed.

But.
I perhaps I am dancing with life in a different way.
With a spirit which is soaring.
My spirit is dancing.

I am dancing but not as I had hoped.
Not as I had envisaged.
But I am dancing, in my own way.
And take my dance with society, at puppet festivals, symposium, and universities.
Dance through my work.
Dance with my work.

During my recent retreat at Dzogchen Beara I had intended to create an animation film I had in mind for a year. But I was too ill. I barely left my room. I did manage to film a few very short clips and took some photos - at the nick of time (half hour before going home). At least I could go home some bit satisfied. See below for an impression on what I would have liked to create.

"I" am stepping out of my cocoon, and with lots of support I can dance with life.

And to top it all, my journey through illness, puppetry and 'dance' is to be filmed tomorrow by our national broadcaster. More about this later.