Before and After CAP Awards

... one more little bit about the CAP Awards.

When the shortlist of the CAP Awards was announced, there was quite a bit of excitement in our little town of Lismore, as TWO of it's authors had their books shortlisted, in separate categories.

Well, you know by now that my Into the Light book was shortlisted in Best Non-Fiction
The other book was Alan Murphy's  PROMETHEUS UNPLUGGED!  in the Best Young Adult Book. Robert Dunbar had reviewed in the The Irish Times: "The poems in Alan Murphy’s third collection, Prometheus Unplugged, exhibit a new assurance... Myth and music chime harmoniously in verses where ancient Greek meets ageing rocker and where the encounters resound with literary echoes."
Our local newspaper The Dungarvan Observer published Christy Parker's Article about the excitement.

It is quite hearth warming to have made so many new contacts with the other short listed writers, and also with editors, and others who were involved with the event, and to have been contacted by book  and writing magazine publishers.
Thank you all!  It is wonderful to have been acknowledged into this world of publishing. Into the Light indeed!

If you still have an appetite to read more about the awards- here is a lovely review by Book Nanny Bernadette Kearns
"The inaugural CAP Awards: The calibre of all the books on the CAP Awards shortlists make it clear that many Irish indie authors have taken on board and successfully addressed the issue of quality in their work.... "
This review has a link to all the shortlisted & winners books and where they are available.


All for now.
Upwards and Onwards.


My next event is the Dis-ability ... This Ability exhibition where my books and some of my art are on exhibition. See HERE for more about that.
Opening 12th November at Tramore Coastguard Cultural Centre, at 3pm 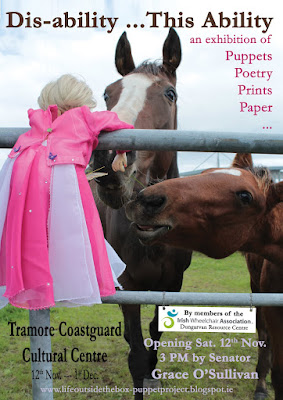 Email ThisBlogThis!Share to TwitterShare to FacebookShare to Pinterest
Labels: awards, books, exhibition, Into the Light, writing