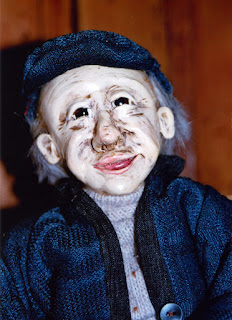 While tidying my 'office' I found my ZIP drive - a storage device of days gone by - and a few days ago I plugged it into my computer to see if I can retreive the files which are on it.
A bit of a challnege, but I was able to find a very roundabout way to bring some stories back to life. This is one of them.

Although this account of Brian Brain was written in 2001, I still experience a lot of the same issues…

... A thought that came up when I picked up my journal was something R. had said a long time ago.  “I am sabotaging my recovery if I keep going over my limits.”
Very true but what I would like to know is, where does this thought suddenly sprung from?

Maybe something to do with today's page of Simple Abundance by Sarah Ban Breathnach?
Fair enough the word sabotage is mentioned. There you go, that is how my brain seems to work, it picks up on a word, opens up the drawer containing sabotage and a thought flows out.

I envisage my brain to be like a filing system, full of drawers, containing thoughts, feelings, emotions, memories, whatever.
My system is made of beautiful small old pine drawers, with tiny wooden knobs. The drawers full of index cards. Off course of artistic design.

A little fellow called Brian, is in charge of this amazing library of memories, although he is not always very efficient. Early memories were badly filed and many lost, maybe deliberately? Or perhaps put on the pile to be sorted later.
Unfortunately this little fellow has been badly effected by M.E. too. The heap of ‘to be sorted later ever increasing.

Occasionally some memory is retrieved from the pile by Brian, and I wonder if he is playing tricks with me or if there is something in this specific picture that I need today. I have my doubts...

The big pile of unsorted memories and the disarray of the overall system has left me in pretty embarrassing situations.
The drawers with peoples faces and appropriate names and valuable information is poor, to say the least.
I see a face and Brian starts to run a round like a lunatic opening several drawers, the face says hello. Which means we have met before... more drawers opened.
As I know the difficulty Brian is going through I acknowledge the smile and tell the face, embarrassed, that I see recognition but that is as far as I get.
I get a name. More specific drawers opened, other kicked shut. So bit by bit, with the help from Brian and the face and my acknowledgment of incompetence we arrive at a final conclusion.

Me relieved and a conversation can begin at a reasonable level. Brian sitting down sweats poring of his tiny eyebrows. All of this probably leaves the system in a bigger state of chaos, but for this time I am saved.

I wonder if actions are also part of his department?
During the time my brain was severely affected by this illness I made many funny mistakes, laundry made it several times almost into the fire or the fridge.
Running a bath could have me put the plug in the sink instead of the bath, most of the water run away down the plughole.
Ringing the bell instead of turning on the light.
Fun, thankfully I can see it as fun.

Numbers were very confusing too, I remember reading out my newly acquired phone number to a friend and it was completely different. No reverence what so ever to the actual number.

Word were also a major struggle for about one year. Lists were a vital item as memory failed me all the time. But the word on a shopping or to do list were of a new language: Letters from the second word would appear in the first: windox bowes (window boxes) , or half appeared in Dutch: cauliflower (bloemkool) would appear on paper as bloemflower.

Obviously I only became aware of it when I viewed my list.
Two letters might become one. This still happens when tired. The letter i would also function as the leg of the letter n.

So if Brian is responsible for all of this he is a pretty mixed up sort of fellow, but doing its best to get through the pile of unsorted data, putting everything where it belongs, not a mean task!

Not always comfortable to have this lousy brain but fun all the same.
Lately I found myself in the bathroom, well actually trying to get out of it. The door opening inwards, I opened it with my left hand, but couldn't get out. It took me a considerable amount of time to realize and the to actually act out my thoughts, that I had to move my feet back to open the door a bit further, so I could get out...