'Invisible Octopus'" (3) M.E. and the Phoenix - rising from the ashes

During the past five months I have been working with Dr. Emma Fisher through a mentoring bursary from the Arts & Disability Ireland Connect Scheme. The aim was to write a script for my existing puppets, as well as explore alternative forms of puppetry to accommodate the physical challenges due to my chronic illness/disability M.E..
In this paper, which I will share in sections over the coming week, I explore the background to ‘Invisible Octopus’ and the challenges, opportunities and personal revelations it brought.


First part: Background- Why puppetry
Second part: How illness/disability dictates the design of puppets and props

During the past year there have been several moments when I felt 'my time was up'. But yet again, I have risen from the ashes. During the first mentoring with Emma in person, we talked about the theme of death, and how to explore that through puppetry. I had written in my project-scrapbook how 'Death and death of puppets are a recurring theme in my mind... 'I am not afraid of dying, I am more afraid of needing more care.'

"I am not going to die, I am going to write a book. To commit to writing, or art, is to commit to living. A self imposed deadline of continued existence...* Sinéad Gleeson

I have had to make many changes, some easier to accept than others. I now have daily care, three times a day. This came after a long and hugely challenging ongoing battle with the HSE - our Irish health system. (Read more about that Here).

Changes were made to my garden and home to make it more accessible and easier to navigate. My garden being of huge importance to my mental wellbeing. I don't feel as housebound as during the winter months.
It is a place of healing, and features often in my work and in the 'Invisible Octopus' project.
It is in nature where I see death occurring throughout the seasons.

On the theme of the death of puppets, I remembered a story told by my now deceased friend Cecile, who in her early years assisted her puppeteer father. After her father passed away, Cecile felt that the puppets were not in a well enough state to be sold on, and she did not wanted to continue as a puppeteer herself. She told me how she had a puppet funeral. She burnt the puppet on a bonfire. A hugely emotional event. Cecile told of the amazing colours rising up into the sky. Brought about by the varied materials used.

Another story I remembered was of the wonderful, kind puppeteer Vladimir Zakhorov. A Serbian puppeteer who totally stole my heart with his work. "Loneliness is an appealing thing - In the forest I walk as one, I work as one, I live as one." ** Vladimir tragically died when his studio and theatre burned down - he tried to rescue his puppets.

After each relapse followed by many months of partial recovery, I’d ‘rise from the ashes’.
Like the Phoenix, I reclaim life. Nearing the end of its long life, the bird Phoenix settles onto its nest and burns to death. From the ashes a fledgling Phoenix arises. Symbolizing the importance of old endings and new beginnings.

This very powerful imagery is relatable to the experiences of life with Myalgic Encephalomyelitis (M.E). But translating this to burning puppets to fully explore the rising from the ashes– even in a simulated way - was too much to deal with on an emotional level. It was too final an image, even if the puppet would rise again.

I felt a responsibility not to bring additional fear through the imagery to the millions of people living with this often-misunderstood illness. We live in the shadows. Many of us are hidden from society, too ill to partake. I did not want to ‘burn’ us, to bring us back to life.
Even though a tweet from Puppet Place in response to my talk at Broken Puppet Symposium in Bath so brilliantly suggested:  “Puppetry is our emotional prosthetic, it gives voice to the things we cannot say.” ***

I decided not to say our ‘rising from the ashes’ through the imagery related to the burning of the Phoenix. This process did make me think further about death, and my relationship to it. I am not afraid of it. I observe death and renewal in nature. I read more about impermanence. Each day is a death. Each breath is a death.
Instead I went for the imagery of cutting strings, which I felt was as powerful, but not as emotionally challenging. The cutting of strings would release the puppet from the challenges of the illness. Not in terms of death, but in terms of freedom of mind.

I imagine that towards the end of the film, the birds free the puppet from the cross by cutting her strings. She fall into my hands. Her large scarf becomes the wings with which she can fly. She is one with the birds. There is more than one way to fly.


If only for brief moments of time

One can say that a puppet when not animated, is dead, as the breath is everything for the puppet.
Yet, I can see life in ‘The Girls’ seated in the recliner or the wheelchair, held upright by their cross hooked up to the ceiling. Let got fo the strings, and she slumps in her chair.


There is a cunning mix between the apparent life of these inanimate objects and the way I can be lifeless and stifled because of chronic illness. I too need to be ‘propped up’ to remain upright. Inanimate and death. Breath and life.

The analogy of birds frequently appears in my work over the past twenty years, as well as in Invisible Octopus.  Birds transcend the limitations of the body, the mind soaring. 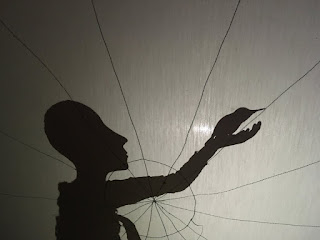 The draft script of Invisible Octopus starts with shadow puppetry of a sculpture I made a few years ago called ‘Wisdom’. Wisdom is a tall figure with driftwood legs rising from solid ground. A bird rests comfortably in the open palm of her outstretched arm. This scene is followed by a shadow image of myself with a bird in my hand.  (see top image)


There are many bird feeding stations in my garden. When I can't be out in the garden, I observe the birds from my recliner or bed inside. So do the puppets. Throughout the summer I filmed birds from the viewpoint of my puppet, seated in the wheelchair, birds feeding around her.
Birds are a continual source of inspiration to me.

Creativity and the Phoenix

The symbolism of the Phoenix can also be related to my creative life. In tandem with the illness my creativity dies and is reborn time and time again, making the invisible visible even to myself, transforming pain into poetry.

To be explored in Next chapters:

just beautiful, it brought tears to my eyes, the level of expression, thought, emotion and processing and i love it. both fear, concern and hope and yet travelling 'onward and upwards.' thanks for all of this.

Thank you so much for your kind words.
Sitting here with goosebumps all over, the good kind, which happend when I read somethig that touches me deeply.

wishing you all the best
Corina

Your words are always so beautiful Corina. Deep and moving, moving deep like sea currents that warm and nourish the whole world. You pull such meaning out of things, and share so generously. Wow, thank you.

Sometimes I imagine that the Earth is the emotional heart of the solar system, and that human beings are the emotional prostheses of the Earth, but that we get confused and mistakenly act out for real, what we might better only play at. Sending love to you! I'd be glad to chat if you ever have the time, hear what you're feeling and what's new... X

Many, many thanks Martin, for your heartfelt words.
Received with gratitude.