48 Hours after leaving home I finally made it to my destination. Texel. The biggest island of the Dutch north coast. You'd swear I was traveling to New Zealand, it all took so long.

It was a very eventful, challenging, frustrating, worrying, and upsetting journey. But with some beautiful moment of kindness, love and compassion. However,  I still rather had been on that scheduled flight...

The first few hours after the cancellation of the Aer Lingus flight, on which I and many others had already checked in for (see last post), was spend trying to figure out how the next step of my journey was going to happen.

The Cork Airport Hotel staff were just absolutely amazing. They allowed me to stay in the room till 2 o'clock so at least I could have a sleep and rest before the next flight was due at 5:20pm.
The Receptionist even tried to contact Aer Lingus as she could see that the disruption of my plans were really are the air line's  problems. She felt that they should help me figure out where to stay next. And assure me I would bit end up having to pay the newly incurred costs.
You see I would not arrive in Amsterdam airport in time to be collected by my brother and brought to the island where I was staying. We would not have been in time for the ferry. And my brother was unable to pick me up that night anyway.
So that meant that they might have to stay in a hotel at the airport in Amsterdam. That would've been a very costly stay, financially. It also brought me to tears thinking how I was going to manage with severely depleted energy, a wheelchair, and a suitcase full of books. I found it difficult to oversee all these challenges while so exhausted. The Kind receptionist even rang to find me a accessible room nearly Schiphol airport. She was so kind. (And so we're here colleagues.) We agreed that some breakfast might make me feel better and a good rest.

When I returned to the desk, she was trying to get a hold of Aer Lingus again but was unsuccessful. Around that same time I received a message from my friend Marga who offered to pick me up and I could stay with her for the night. The receptionist suggested that maybe it would be good idea to be with a friendly face, a friendly person that night to ease the stress. That was a good point. I took Marga up on her offer and she kindly collect me from the airport later that night. If I was not in a wheelchair, I would have kissed the Dutch ground...

It was so good to see her, also as it was the first time I saw her after the passing of her husband, my dear friend Gert, two months earlier. It was beautiful to be in her company to share memories. To be in the house and feel his presence. The house felt peaceful but it obviously felt strange. Gert was not there.

I am glad though that I had the opportunity to see Marga and at the same time being supported in my personal challenge.

The following morning my brother Hans  picked me up and we drove to the ferry at Den Helder and made it onto the island of Texel. We stopped briefly to look at the location of the family reunion accommodation, before driving to my hotel.
A day late.

My Brother Kees, who lives in Canada, was going to spend the few nights with me in the hotel I had booked in Texel. I figured a few days of rest before the busy weekend would make sense. And I was glad my brother Akers agreed to join me.
A few days to catch up on our lives, just the two of us before the remainder of the family arrives for the reunion. Kees arrived in Holland a week ago and had been cycling to various friends. He had arrived the day before on his bicycle in Texel.
It was lovely to have lunch with two brothers, before finally taking ownership of my hotel-bed-and home for the next few days.

After a rest Kees brought me through the small town centre, which is full of tourists shops. We didn't get into any of them, other than a bookshop and the supermarket...
We both prefer nature. And not so many people.

It is lovely to realise how much we have in common, how we both view of the world and experience our lives.
It is very rare occasion that I can spend a few days with Kees, just the two of us. I am so enjoying this. I treasure it.

Lying on the bed, I spotted a big bird on the roof across the road. I thought it was a large crow type bird with a twig in its feet. It actually turned out to be a bird of prey. I wanted to photograph it but I did not have my camera with the telephoto lens... I saw that the birds, there were two, and their minders were walking towards the little square in front of our hotel. I asked Kees if you could please bring me outside in the wheelchair. We did and I got extremely close to this South American Falcon. I was just beautiful. And the Falconer asked if Kees wanted to have the bird land on his arm.
Oh my goodness what an experience. 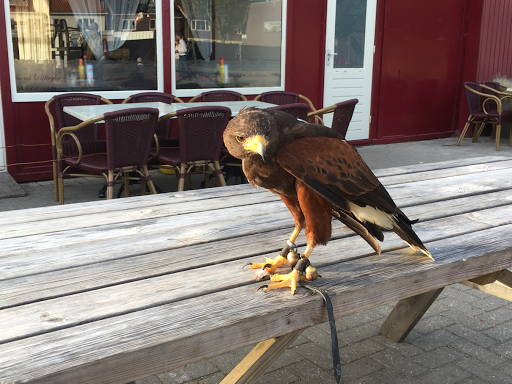 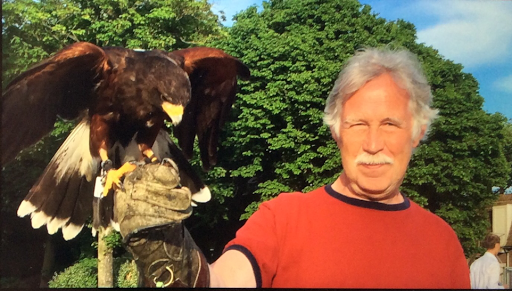 Probably my photo of the day. The accidental one. The Falcon walking away from me, me cuddling with my iPhone to get the position right... 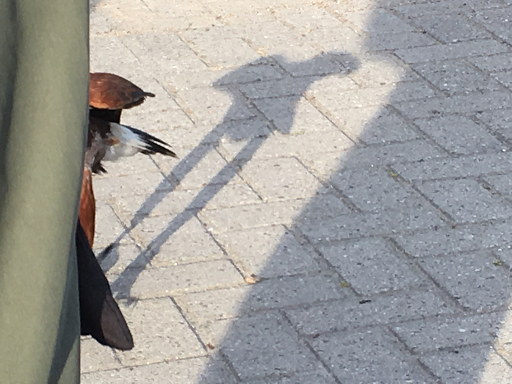 So.
I have arrived.
I am exhausted.
I am happy.
I have rested for most of my time.  And had some lovely chats, and shared comfortable silences.
My brother is out on the bike again, and later on we will take the bus to a nearby smaller village. Where I  see and smell the SEA! Maybe even get my toes into the Dutch waters.