During ME Awareness week in 2004 the RTE Nationwide team
came to my house in Lismore,
to re-tell the story which Artist David Begley captured
in the documentary 'Fit to Fly'
about my (creative) life with ME. 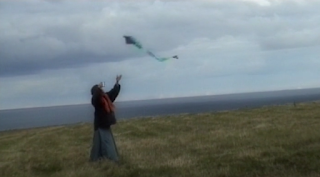 In February 2018 Nationwide came back*.

The Life Outside the Box puppet project
which I had facilitated,
and the teaching in my studio
were the starting point of this update.

I am immensely grateful to the Nationwide team
for their interest, kindness and utmost respect.
And for RTE for allowing me to put the two
Nationwide features on my website/blog.

And many thanks also to all the people who were/are
part of my journey through illness.
I could not have done it without you all.

Both Nationwide features together.
Duration: 13.36 minutes

Video in two parts (first video might start with a black screen for a few seconds... )
Duration: 7 and 8 minutes respectively.

(*moved house in the meantime)