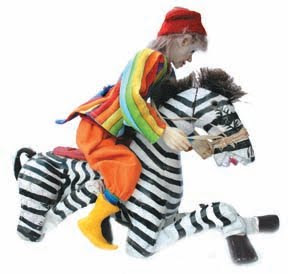 Cirrus woke up all cosy from sleeping with Robert Cat in his box under the bed. Cirrus stretched out and looked up towards the window sill, to talk to Zebra.
“We had better practice a bit of flying today.” Grinning from ear to ear he continued, “I am SURE Cloud Nine will be above Ballynelligan soon! Then I can go home, and tell EVERYBODY about my adventures!”
“Can I really fly?” Zebra said a little confused. “I thought I’d been dreaming.”
“Don’t you remember? We were flying around the tree last night. It was AWESOME!”

Cirrus suggested practicing by visiting his friends, and recited the words the Fairies had taught him. They flew out the open window, through the garden, over the high stone wall, towards Ballynelligan cottage.

Sarah Robin nearly fell off her perch when she saw Cirrus and Zebra flying by.
“My goodness, look at you!” Having recovered her composure, she added, “so when are you going home?”
“Well, we need more practice today, so I’d say tomorrow.” Zebra nodded in agreement. “And the Fairies kept talking about Christmas and a Santa Man, who is visiting tonight. I’d really should stay around for
that!”
“Well Cirrus, I know e-v-e-r-y-t-h-i-n-gabout Christmas!” Sarah boasted.
“Oh, sure, I remember now. Stephen Wren told me.”
Not listening to Cirrus, Sarah continued, “you know, Christmas was once about the birth of Jesus, but now humans only talk about presents and Santa Claus! AND”, she added, pointing to her red breast, “they have also forgotten that a robin took a thorn from Jesus’s crown. It was his blood that coloured our breast red!” Taking in a deep breath, she went on, “oh yes, before I forget, about 150 years ago, humans started to send Christmas cards to each other. Of course OUR picture is on most of those!”
“You are famous aren’t you?”
“You are right, I am! Come to think of it, Christmas is all about robins and the colour red! Even Santa wears a red suit!”
“So, who is this Santa Man?” Cirrus asked.
“I’ll tell you now. Santa Claus, and Mrs. Claus, live in the far north, in a land where there is always snow. There, with the help of lots of Elves, he makes toys for children all over the world.” She gave a deep sigh, “and then on Christmas Eve, which is tonight, he comes down in his sleigh pulled by nine reindeer. It is truly amazing to see the sleigh land on the roof, and to see Santa climb out and disappear down the chimney.” Shaking her head, she added, “he is a big man you know...”
Cirrus, thinking hard, asked, “but how does he come out again? Doesn’t he get stuck? Does his suit get all black?”
“I know it is amazing, but true. I have seen it with my own eyes. Santa goes down the chimney with a sack of toys, eats a biscuit, and drinks the glass of milk that has been left out for him. Then before you know it, he is up and out of the chimney; clean as a whistle, and on his merry way.”
“I certainly stay up for THAT tonight!” said Cirrus.
....
Abstract from the Cirrus Chronicles - Landing in Ballynelligan