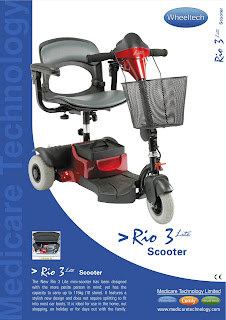 In 2009 I was working on a story which later became my first children’s book (The Cirrus Chronicles). As part of this project, I booked a trip to the Edinburgh Book Festival. I was booked in for a workshop with children's author Linda Strachan, who also publishes books on how to write for children, and aspired to meet with publishers and other writers to make my book the best it could be, to maybe even find a publisher for it. A very exciting time!

As I travel with a mobility scooter I am obliged to inform the airline, in this case Aer Arann, about my needs and the mobility aid I would be travelling with. I did this two weeks prior to travelling, informing them that I had a mobility scooter with an airline approved battery and read out the details of the “wet, non-spillable battery”.

On the 26th August I was dropped off at the airport. I had brought a copy of the scooter's battery's details, but the young woman who checked me in didn't need to see it. I was told that my scooter would be tagged at the boarding gate.

Having made my way to the gate about an hour before travelling, I heard my name being announced about half an hour later. Having made my way back to the security personnel, I was asked questions about the safety of the scooter battery. I showed the leaflet about the battery and lifted the battery out of the scooter (the battery is in a sealed box and does not require any disconnecting of wires). The leaflet with safety information was scanned and forwarded to the headquarters of Aer Arann in Dublin.
I remember talking with one of the security men about how this scooter has enabled me to travel on my own, even in other countries (I had been to Holland with Aer Lingus on several occasions, bringing the scooter with me). The fact that I didn't need a 'pusher' anymore for my wheelchair, made a huge difference in my life, a life I prefer to live as independently as possible.
Other passengers had started to board. When the staff came my way I held out my boarding pass (even writing this gets my heart beating fast...). I was told that I was not allowed onto the plane. The battery was deemed dangerous.

I panicked. I asked to speak to Aer Arann personnel to discuss this problem. The battery was airline-approved. I had booked it in two weeks prior and had been at the airport for an hour.  I was told there was nobody from Aer Arann in Cork Airport. Servisair does their handling. I asked to be taken on board and leave my scooter behind in Cork, to be picked up by my friend. (I had read in the Festival brochure that there were courtesy wheelchairs available, and figured that if the organisers heard my story they would lend me one).
“No, you are not going on that plane, your suitcase has been taken off.”

I felt like a criminal. All this was said in front of 'fellow' passengers boarding the plane. "Maybe they're glad I am not on that plane as I am a security risk," I thought.
I cried. I cried seeing my small purple suitcase standing on the tarmac beside the plane. I was not allowed on the plane, with or without my scooter. I felt it was about me not just my scooter. I see this as the most horrendous, humiliating, painful experience of living with a disability so far. I felt that my rights to travel were taken away and that this whole episode was very badly handled.
The plane left for Edinburgh. I waited to be picked up and was very distressed. I was given the option to come back the following day, with my wheelchair, but I was too distraught, complete bereft of any energy and would have missed the most important workshop in any case.

Home, after an 'angry' rest, I decided to write about my experiences, and looked up the airlines policy on disabled travellers, etc. Writing is my way of dealing with challenges. On the suggestion of the friends I was to stay with in Edinburgh, I forwarded my writing to two papers. The Irish Times and the Irish Examiner. Both contacted me immediately, and articles were published on the 28th August 2009. The Irish Times article was published on page 2 and the story ended up being taken up US paper The Irish Immigrant.
Aer Arann stated in this article that the scooter battery was a danger to be brought on board an airplane and safety (understandably) is their main objective. All I wanted was an apology in writing.

I talked with the Equality Authority and with a recommended solicitor in Dublin. After a lot of deliberation, I decided to go with the services of this solicitor.

It took until December 2010 to get a date for the Equality Tribunal hearing. This was later postponed as “3 of the 5 witnesses were unable to attend”. My heart sank. So many witnesses. I was ready to give up the case, not because I had given up on my conviction that I was right, but the stress was too much to bear. My energy is precious. It started to feel like the David versus Golliath story...
A new date was set for January 2011. The case was heard in private in a hotel in Waterford. A friend asked, and was given permission, to stay with me during the hearing for which I am forever grateful. The room we were in was the Lismore Suite. I felt strong and at home (Lismore is the town where I live).
I don't want to bore you with the details, but there were a lot of arguments about dry- versus wet cell batteries. In short, the only true dry cell batteries are those in your watch, or alarm clock. Wet batteries are the ones in your car, the ones that need topping up at times. These are also used in some more advanced electric wheelchairs. The wet, non-spillable, as in my scooter, is regarded as dry (by most airlines) and therefore safe.
The hearing took most of the day. Thank goodness they talked to me first, when I was still somewhat 'alert'. My barrister interviewed me and I was later cross-examined by the Aer Arann team. I stuck to my story and was grateful to have researched the issue in more detail, and for the good understanding with my solicitor and barrister. To relay the whole day would take too long, but you can read the Equality Officer Orlaith Mannion's report at: Full Case Report

Overall, I was exhausted, but pleased with my 'performance'. I knew my story. I felt my story. I was treated badly on the day of my planned flight, and I wanted an apology. In writing.
In July 2011 I was told that I had won the case. But that Aer Arann still had 45 days to decide if they were to appeal. The Irish Times journalist who had initially written about my case in 2009 published another article about my success.

Aer Arann did not appeal the case. I was awarded €3,000 (just over half of the maximum allowed), on the grounds that I had been discriminated on the grounds of disability. This money was a welcome bonus to help me fund my other big event of the year, the building of my studio.
I am so grateful to all the friends and supporters who kept me going as I fought the case, and to solicitor and barrister for their expertise and for not charging me for their time.
Aer Arann is currently in the process of fulfilling the other order from the Tribunal’s report: to conduct a review of its policies and procedures (to include their terms and conditions of carriage and their Ground Operations manual)

I still would be happier if I had made it to the Edinburgh Festival on that day in 2009, but as that was not the case, I am glad that I stood up for my rights and those of people with disabilities.

I am grateful to all of you whom were aware of this case but didn't make it public when it was too sensitvie to do so. For all the support I received to stay with my story and to fight the fight to allow a person with a diasabilty to travel like anyone else. For all the support I recieved when the news came out that the case was won. For the Editor of Journal.ie * to invite me to write about living with a disabilty in modern day Ireland.
For solicitor Joe Durkan and barristor Siobhan Phelen for not charging me for their time.

A big thank you to all of you! I could not have done this without you.

To find out more my art, writing, and thoughts on life, visit: www.corinaduyn.com (website and blog)

This article was published in the Summer '12 Edition of Spokeout, the lifestyle magazine of the Irish Wheelchair Organisation (IWA)

ps... As always it is lovely to know that you stopped by to read my musing and follow my creative adventures. It would make my day, if you leave a comment... preferably here, on the blog...?


Many thanks & Lots of love
Corina

Links to some items in this story:
The book I was writing in 2009 Cirrus Chronicles
Children's author: Linda Strachan
Article in Irish Times 2011 here
Article in Journal.ie see here

These is really a nice piece of writing! How are there no comments? Good job!

Hi there, Thank you for stopping by and for your kind comment.

Looks like you had a "tour around my blog". Thank you!!

No comments... the news that I won the case was earlier reported on in the media. People commented at that point. This story however is my own account, in my own words. Again, Thank you for your comment and support.
Best wishes to you
Corina

good work there whit you success great to see the law working for you , best of luck in the future when traveling ..

Thank you, and best wishes to you.