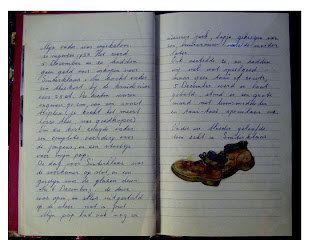 My mothers illustrated notebook with stories about her childhood
For a long time I wondered where my love, desire, and need for writing came from.
I didn't have to look far. My parents, siblings, and great grand father, all wrote.
My great grand father wrote letters for other people, during the late 1870's. "Even to the queen", as my mother recalls in her notebook. The letters were closed with waxed seals.
Oh how I wish to see one of his letters. 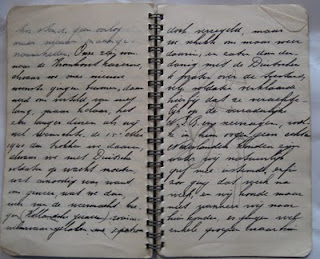 My fathers notebook
My dad wrote during the second world war, while in the army. His words are all about how much he didn't want to be there.
Letter writing was a big part in our family as first my mothers sister emigrated to Canada in the early 50's. Later her children, including me, emigrated. My mother had kept many of the letters we wrote to her. Three of my siblings spend many years travelling the world, in which again, writing diaries and letters were a big part of their day.
As consequence to her emigration children, my mother travelled to us in Canada, Chile, USA, and Ireland. All her travels were documented. Apart from this she wrote an illustrated notebook about her childhood. A valuable piece of storytelling.
Is it a wonder I like to write?

Email ThisBlogThis!Share to TwitterShare to FacebookShare to Pinterest
Labels: writing

I think keeping diaries and sending letters was much more important years ago. I wish I could enlarge the images here...such beautiful handwriting :O)

Sorry you've had such a nasty scare. M.E. is a monster that is determined to be heard but you're doing well with meditations etc (*)

Thank you John,
I love my fathers handwriting. I only have a few photos of this tiny notebook he wrote. If you like I can email you a bigger image?
I just remembered at the back of this notebook he did calculations of the amount of hours he was in the army. I'll see if I can find a photo of it somewhere.
The monster ME is so hard to beat isn't it.