Facilitating the Life Outside the Box Puppetry Project


I am Deeply humbles by the experience

Followers of my blog on Facebook have seen announcements of the Life Outside the Box film screened in Canada and in Dungarvan Cinema, Shopping centre, Cheshire. and Puppet Blog.
Last Friday saw the first screening at the Dungarvan Cinema.
Our little film of the Big Screen!
And Today is the Screening at the Festival in Canada!
And on the Puppet Blog

The Life Outside the Box Puppetry Project came about when I started to attend the  Irish Wheelchair Association (IWA) Dungarvan Resource Centre as a member in 2014. I was supported there with the making of my own sculptures, the first piece was Aerial. Staff and other members became aware of my work, and I was asked to facilitate the creation of a series of puppets and a puppet show. Being awarded the Create - Artist in the Community Scheme, funded by the Arts Council of Ireland, made this happen. The IWA staff gave us all the practical support we needed. 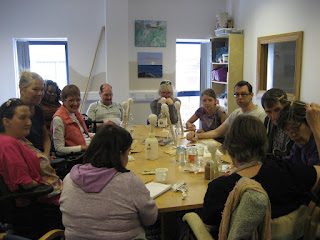 We started thinking about the project in February 2015, after months of planning, looking for funding, and thinking what we might make, we got started for real in June 2015. We are a very diverse group of people of age and ability. As I know what their abilities, and challenges were, I adapted some of the tools, and looked at who could do which part of the project: Puppets, props, photography, writing...

In order to keep my own well being in mind, I had to plan each week's class well in advance. But planning is something I enjoy doing.  During the week I would think about what the next step would be.  What I needed to design to make sure most of the participant would be able to do the next step.  My aim was that each member would do as much as possible themselves, and where needed ask support from each other. And only then ask the IWA staff for help when required. I had support staff too, which made is possible for me to teach again after a 17 year gap. All in all a very empowering experience.

Preparations- and making it work for me and my fellow members

Every Saturday I do the preparations. Sunday I would have a complete rest day. Monday the IWA bus would pick me up to bring me to the Centre. Sometimes laden with puppet-body-parts, tools, fabric, or whatever else was needed for that day's session.
Early on in the project I would come in and have help from staff to set up the room. But as there were days that tools, or materials were missing, I realized that this was draining my valuable energy. Energy I needed to teach. I got smart. I would email ahead of time with a list of what was needed the be ready on the table. That worked a dream. I could come in, have a cup of tea. Go to the room and mentally get ready for my group.

The fun we had during this project,  I will never forget.
The enthusiasm and hunger for exploring the next step of the process never ceased.
I am deeply humbled by the experience.

Tuesday and Wednesday I'd barely existed, but you know what? It was worth it!
All of the members became involved. Some more than others. There were amazing moments of "Wow, I did not think I could do this!", to "I found me again" (since becoming ill). One member was not comfortable to work in a group, so I worked with him - with help from IWA staff- on a one-to-one basis. It was lovely to see his enthusiasm and capability. Together we made the Big Hand that helps us all out of the box.

We met every Monday to work on the puppets. Starting with a stick and a strip of cotton, we made the bases for the heads. Over the following six months we made nine puppets, a Disability Box, a large hand, published a ‘fly on the wall’ booklet about the process, made a film and hosted so far three exhibitions.  The theme that emerged was that 'society' would like to put us in a ‘box’. The Disability Box. But 'Step out of the box and you are free'.

The book we made - available here - all proceeds toward more puppet-or art projects - chronicles the making of the puppets- and the fun things that were said.
The book also included the short film (DVD) which is now being shown at the International Disability Film Festival in Canada. A VERY PROUD MOMENT!
The four minute long film shows the puppets stepping out the Disability Box, at the Dungarvan Shopping Centre. We chose a public place, as we would like to be part of society!

Since that time, we had three exhibitions. Two in libraries and the last one in a Gallery in Tramore.
And now, the screening in Canada!

It is absolutely heartwarming the local support we are getting. Eugene and Janos at the Dungarvan Cinema could not do enough for us to celebrate our film. Also the Shopping Centre, Easons, IWA, WLR FM Geoff Harris, the newspapers.
Thank you all, for your amazing support.
My, and our, Deepest Gratitude.


On Wednesday 15th March- the day of the screening in Canada,

the film can be seen on the Puppet Blog on this day too. 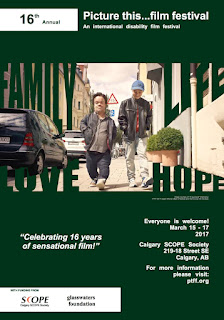 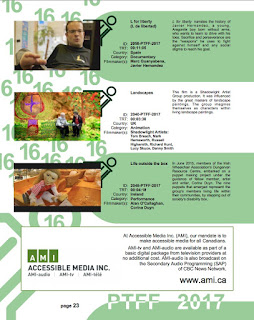