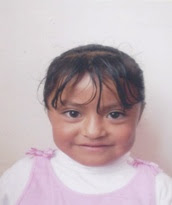 This is 'my' little daughter Yudith Evelin, well at least, I see her as part of my life. Yudith is almost five years old and lives with her parents and little brother in Mexico. I have been her sponsor for the past four years, through an organisation called Child Fund.
About ten or eleven years ago, I was pretty much house bound, and thus unable to buy Christmas gifts for family and friends. I wrote to them and suggested I sponsor a child in stead of buying gifts that year. I contacted Child Fund and the girl that was chosen for me was called Kinga, a little 6 year old, living in Romania and enrolled in a school for the blind, as Kinga had very poor eyeside. We communicated by letters and I received photos and drawings from her. My most precious letter was when Kinga asked if I would like to be the Godmother of her new doll. This little girl grew into a young teen, who was very keen on playing music, creating art and performing in plays.
Four years ago the organisation - the school for the blind- became able to support itself and funds through Childfund were no longer needed.
I was asked by Childfund if I would like to sponsor another child instead. At the cost of only €20 per month, I said 'of course'!
That is how I became involved with my new family. Yudith's mother writes to me and posts photographs. It is lovely to be able to make a difference in the lives of others less well of than me.
Friday I received the yearly progress report, and this time it came with a short CD documenting how the early childhood centre and school are run, and what impact the sponsorship has on a whole community. Besides the basic education, the children and parents are educated about healthy eating, the children receive health care, and recently the families were supported with the growing of their own vegetables.
I am proud of 'my' little girl and am grateful that I am in a position to help.
I hope that many of you will consider entering in a sponsorship for a year. See how it goes, and I can guarantee that you will not look back. Childfund - sponsorship
Thanks!

She is lovely! i have a 'daughter' like that in Uganda for last four years, acquired her in 2006 from a charity called 'Fields of Life' that a work colleague is involved with. It is really nice to get letters and cards etc and progress reports, it has often cheered me up. My friend /work colleague has been out in Uganda and actually met the little girl who is about 11 now, hope to meet her one day myself. She brought back photos. It is well worth sponsoring a child and very rewarding for the sponsor as well. Would encourage people to do it. :)

Jo Ann, i agree it is well worth being a sponsor and wouldn't it be lovel to meet up with ones 'children'? I had great hopes to visit Kinga some day, but that hasn't happened.
spread the word!
Corina