Lying on the garden bench in the SUN.... yes yes it has arrived in Ireland .... I'm so excited to watch the garden "rejuvenate" itself yet again. No matter what is going on in the world or in our lives, small plants are sticking their heads up among the winter's debris.
I am sticking my head up among the debris too, although I can not claim to be rejuvenated in the correct sense of the word.. especially the appearance one ...I wish!
I do feel however that the sun, but most of all, all the happenings in my garden are helping me to take a deep breath again and get on with my life. I love being outside. I love removing the debris from the garden and uncovering these tiny green shoots buried underneath them.


While snoozing I became aware of birds coming into my garden. A pair of great tits took turns at the feeder filled with sunflower seeds. They'd pick a seed and sit on a branch of the butterfly bush to eat it. The male- on his return from the feeder -would every time sit exactly where his female companion had just left. I wonder what he was trying to proof. Maybe deciding how well her judgement is in finding the right place to eat?
When he decided it was time to go, he took one last seed and flew out of the garden. Swiftly followed by his lady friend.


These little scenes fill my heart.
Same as the bee checking out every crevice in the stone wall, or the starling coming over with friends to eat. After (s)he had checked out the place. 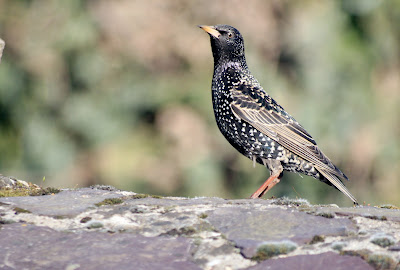 After the disastrous appointment at the hospital there is one thing that I have come to terms with: taking medication. I do not like to put anything foreign in my body. Chemicals? No thank you. But for the past month, I have been on a hormone replacement drug (HRT) which is really putting my life back on track again. For the past year I had such a tough time, it felt that the whole ME experience was starting all over again. A horrid feeling- to put it mildly. Until I realized that maybe the menopause had started. (sorry guys- women's talk). In short I can say that I feel some form of rejuvenation again. I might not become my 20year old self again, but am surely sticking my head above the debris again.
So drugs can be a good thing, and I am grateful for whomever has invented this particular drug. The pain has more than halved from last years levels, and I can move around easier again. Thank goodness!
Talking with that doctor on Monday, and having a good think myself, I am (finally) accepting that drugs can be OK, as long as there are not too many side effects.
I hope/wish you are able to go outside too, and keep your eyes open to what is around you, and of course that you can do this without pain.
Lots of love
Corina