filming of 'Life Outside the Box' puppet project

Here some of the photos taken during the Life Outside the Box filming day
at Dungarvan Shopping Centre last Monday.

A date for your diary...

Exhibition of puppets and box, and launch of book and DVD is on
Thursday 25th February 2016
Dungarvan Library, Co. Waterford
6-8 pm

Books, which includes DVD will be for sale on the night.
Proceeds will help us fund future art projects. 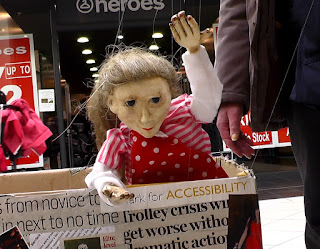 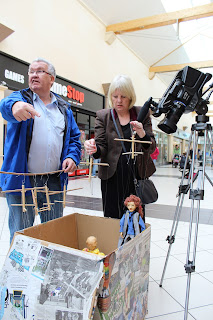 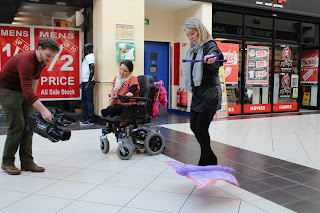 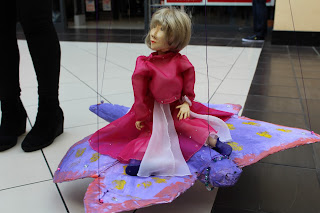 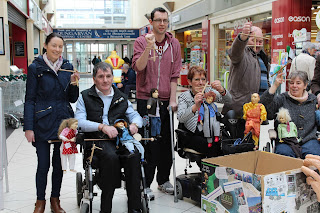 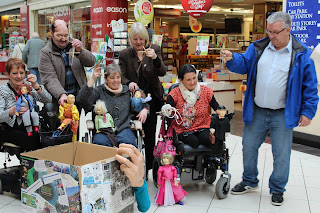 In response to readers of Into the Light book-in-a-box I have created an edition which would be suitable for use in:
All the pages have been individually laminated in high quality pouches in order to be disinfected, if required. The newly designed Box has also been treated in order to be cleaned.

The makers of the box, Designed4U, have kindly offered some discount to bring this product to the people who might benefit from reading Into the Light, and I am financing a part of this edition too.
For the remainder of the cost, I am looking for sponsors to help me bring this version to any of the care centers mentioned above.
You can do this buy clicking on the Buy Now Button.


Many, many thanks for your vision and kindness to bring this book into settings where people living with illnesses gather, or are being treated, or supported.

My deepest gratitude, and wishing you all the best.

The other versions of Into the Light and previous books are available from my bookshop
No comments:

Email ThisBlogThis!Share to TwitterShare to FacebookShare to Pinterest
Labels: books, disability, illness, Into the Light

Life Outside the Box (part two of puppet project) 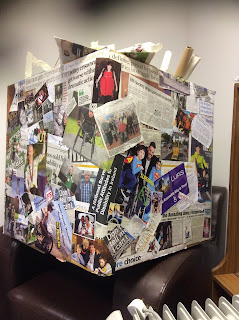 During one of the days working on the puppets we had a 'brainstorming' session to come up with a proper title for the project- the book- and the film. The puppet project was the working title as the saying goes. Well here are a few of the suggestions that did not make it, some for obvious reasons!

The last one... well who knows, the puppets might go on tour... if our film will be given an Oscar nomination next year... we are hopeful!

So, I am happy to announce that The Puppet Project has been given it's proper new title: "Life Outside the Box".


Yes, we are all living with disability/illness, but by no means are we stuck in this box!

We are stepping out of it!


On Monday we will be practicing with our (nine) puppets to get them to step out of the box. Well, I can assure you, it won't be graceful! We are certainly not brilliant puppeteers in this short space of time, but the skills we do have, is having FUN! We are extremely good at that!

And we have pride.

The following Monday, the 25th January, Alan from Bootleg Studios will be filming us (the puppets) stepping out the box, at the Dungarvan Shopping Centre (Co. Waterford). We will be there from about 11, filming from about 11.30. PLEASE COME ALONG!

We want to make our point with this (to be a very short) video, by stepping out of our box, that we too are part of society.

You are likely to meet the 'reporter', a 'musician' busking, a 'granny' dancing,  a baker, a biker, a clerk, a young boy and his dog, and a beautiful girl on a butterfly.
All stepping into Freedom.


Another date for your diary:
The book and the film will be launched with an exhibition (all going according to plan) at Dungarvan Library on Thursday 25 February between 6 and 8 pm. More about this closer to the date.

If you like to keep up to date with this project or other things I write about, please sign up with email on the top right of this blog, or send me a message.

Best wishes and see you on 25th January and the 25th Febraury!

The IWA and the start of the Puppet Project

I have been a member of the Wheelchair Association (IWA) for maybe fifteen years. During this time I have written for their Spokeout Magazine, been the lucky recipient of a writing and an art award, but it took me till 2012/13 to become an active member.
It started with being invited to join the outreach program, which I wrote about here in their Spokeout magazine. Outreach gave me the opportunity to have a day out of my choice supported by IWA staff. One of the things I found challenging was that the wheelchair bus has HUGE lettering on it, proclaiming that whomever is on the bus has a disability. A little more discretion would be lovely... But I got used to it. You get used to anything.

In 2014 I was asked to come along on a holiday to Killarney. To be perfectly honest, it took a lot of persuasion to get me to agree. I did agree. Last minute. When somebody canceled. I found it a rather big step to go. I didn't know any of the members. Did my life really come to a point that I needed a supported holiday? After initial years of being mostly housebound, I had gained great independence over the years, but that had slipped away from me again.  After taking many deep breaths on the bus, I decided to take it all in my stride. And... I had a wonderful time! Met some great new people. We had a great laugh. New friendships were made.

Summer 2014 I was asked (again) to join the resource centre once a week. I gave it a try. I actually looked forward to get to know my new friends a bit better. I had become more dependent on support to be able to leave the house, so a once a week trip out could be very good for me.
As there is staff to support us, I took clay with me to be able to make one of my sculptures. (I was having more difficulties with rolling clay, so having the support to do this was great.)
I made Aerial there. The sculpture developed into something different than I had set out. The people I met, the materials that were around all influenced the final outcome.
A very interesting experience.


As there was quite a bit of interest in my work, I was asked in early 2015 if I could ‘by any chance’ facilitate the creation of a series of puppets and a puppet show with the other members?
Being awarded the Create - Artist in the Community Scheme, funded by the Arts Council of Ireland, in May of 2015 made this happen.

Our group consists of about ten members between the ages of 27 to 73. We are living with limited/partial mobility, congenital physical
disabilities, chronic illness, or acquired brain injuries. Most of these conditions are impacting on our finer motor skills. So quite a challenge to sculpt detailed faces etc... But together we found ways around them.
I am immensely proud of what fellow members have achieved.

We met every Monday to work on the puppets. Starting with a stick and a strip of cotton, we made the bases for the heads. Over the following six months the puppets took on their ultimate personalities. We now have nine puppets, a large box, a big hand, a book about the project in the making, and a short film to be shot in a few weeks time.


The fun we had doing this project, I will never forget. We laughed so hard. And the enthusiasm and hunger for exploring the next step of the process never ceased.
I am deeply humbled by the experience.

We all had IWA staff to support us in whatever way necessary, including myself. It would be too great a challenge for me to bring a project of this scale into the world on my own. The IWA setting has given me the courage to go back to teaching.

I will tell you more about the fun we had; share more images of the work we created;  tell you about the film, the book, the upcoming exhibition, but for now, here are a few snapshots from the past few months.

Rejuvenate
Make (someone or something) look or feel better, younger, or more vital
(Oxford Dictionary)

During the last weeks of 2015,  I had a great desire to start the year ahead afresh, with new ideas -  new possibilities- new opportunities. I like new starts- new days - Mondays and once a year the big one: A Whole New Year in front of me. The Joy of it!

One of my desires was the de-cluttering of my website. After weeks of preparation on my part, with the help of tech-man-Brendan the change over was successfully completed at the Eve of the New Year! I was ecstatic... It was like having all Christmases and all Birthdays come together. Please bring it a visit and let me know what you think?

Another wish was/is to make room in my head, and actual space in my studio for the creation of new work. In order to do this I have a sale of some sculptures. 'Rejuventate' was the first to be sold. And how appropriate is that! At the last day of the year, she was asked to come and live in the UK, with J and S. Thank you!
To me this is hugely significant:
Rejuvenate-

It was actually quite a challenge to let 'her' (sculpture) go. Some works are like babies.  Some take on a significant role in healing and growth. Rejuvenate was/is one of these. And yet it is also liberating to let her go, as it truly 'breathes new life into' my own life.
Creativity continues to surprise me!
The new theme I think has to do with dance- in all its formats.
Watch this space!

One 'goal' for this year too, is to write more on my blog again- about creativity- about disability- about nature- about life- about who/what inspires me, and everything in between.

With every best wish for YOUR new year.