It is all about boxes- and stepping out of them

On the 29th February, I did my very first lecture at UCC by invitation of the Folklore Department. The title of the talk was 'BOXED OUT:  Art and Disability - A Folklore and Gender perspective.'
It was an interesting experience, on many levels.

At the start of my Into the Light project over 3 years ago, I had said that one of the things I wanted to achieve was to give lectures at University (I felt that there was an element of the lived experience of disability missing from Disability Studies). But when I was this notion looked like it could become a reality a few months ago, it was scary prospect to have to stand (sit) in front of a group of students…

There were many thoughts how I wanted to approach this talk. The main topics: Arts, disability, and boxes. In this case seen from a Folklore perspective.
While preparing for the lecture, what surprised me most was how my creative journey of the past 25 years all brought me to this very day.


Becoming ill turned my art into the story of illness and disability. It changed into an inner folklore.

To my utter surprise, when I was looking for images of the early drawings, which many were of eggs, I came across the very first ‘visual thought’ - a drawing of a box…
… And I thought that the boxes only came into my art in the last two-years or so… 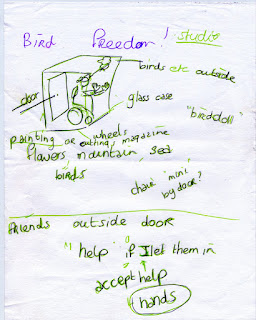 So, 17 years later, I'm giving a talk about ‘boxes’.  How society will try to put you in a box, and how to step out of them.

In the summer of 2014, when I came up with the idea to make the Into the Light book-in-a-box, I also was working on a sculpture called Stepping out of the Box. The connection between these two creative projects only became clear to me months later… As is usually is the case, somebody else probably pointed this out to me!

In the summer of 2015 I started facilitating the Puppet Project with my fellow members of the Irish Wheelchair Association (IWA). We were to create a series of puppets, make a set, write a script and create a short film. During the first session I brought the little box sculpture with me and suggested, maybe we can make a large version if this and it would allow for each puppet to be created as an individual, and each one can ‘leave the box and step out into the world’. The reactions were amazing. All sort of ideas were floating through the room. Butterfly, a dancer, a biker, a musician,…
Little did I know how powerful an adventure it would become? We didn’t just create puppets. We re-created ourselves in a way. We all stepped – proudly- out of the box.

The puppets have taken over our lives. They are intent on going on journeys. Two have visited Youghal beach- others are going to Spain on holidays in May.
I believe the puppets are speaking for us. We communicate through our puppets- that yes- we are living with illness or disability- but we are very much part of society in our own right. We are capable of doing many things- including making puppets- create a book- a video- have an exhibition and having an awful lot of fun doing so. We very much live outside of the box. 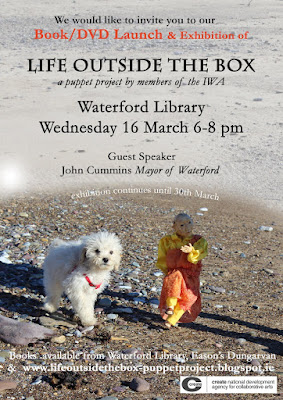 A celebration and launch of my Artist Book Into the Light which will be held at The Sanctuary (Dublin) On Saturday 2nd April, 2-4 pm
Introduced by Sr. Stan (founder of the Sanctuary- a place of absolute beauty and peace), followed by a talk by me.
For further information about directions, book details, Sanctuary, Sr. Stan, see Corina’s Website
RSVP and enquiries enquiries@sanctuary.ie 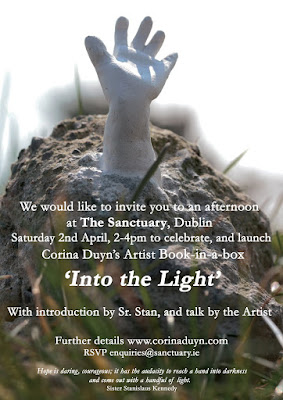 These two Box- projects have helped me too. Having successfully guided my group through eight months of this puppet project has given me the courage to do the talk at UCC. To speak up, and be proud of whom I am. What I have achieved.

Even the fact that the platform to access the computer of this ‘high tech’ room at UCC was not accessible for wheelchair users, and my computer was not compatible with the technology, (I improvised - had the students come as close as they could, and shared my story with the help of my small laptop screen), I was not put out by it. It proved my point about disability- and stepping out of the box!

If you can’t make it to the launches, but like the books, they are also available online see my web-shop . (Into the Light is free of postage, Life Outside the Box €1.50 postage)

The Puppet project was kindly supported by an “Artist in the Community Scheme” funded by the Arts Council of Ireland. Into the Light was supported by Rehab Visual Art scheme