During the past five months I have been working with Dr. Emma Fisher through a mentoring bursary from the Arts & Disability Ireland Connect Scheme. The aim was to write a script for my existing puppets, as well as explore alternative forms of puppetry to accommodate the physical challenges due to my chronic illness/disability M.E..
In this paper, which I will share in sections over the coming week, I explore the background to ‘Invisible Octopus’ and the challenges, opportunities and personal revelations it brought.


First part: (1) Background
Second part: (2) How illness/disability dictates the design of puppets and props
Third: (3) M.E., and the Phoenix - rising from the ashes

Exploring puppetry with an easier access point, mentor Emma suggested shadow puppetry. The word shadow triggered the memory of an unfinished book I had been working on years ago. A fictionalised story about my Great Grandmother’s spirit whose presence I felt on my body like the tentacles of an octopus.
I lived in her shadows.  The Shadows of an Invisible Octopus.

This sensation is relatable to the experience of M.E., the reality of un-diagnosable pain, of something invading my body, the many cognitive problems I have, and not being in control of my movements, of my life. As if some invisible hand and strings have control over my life. As in the drawing I made all these years ago. See first post
During the mentoring process I realised that Octopus became the hand...

M.E. as Invisible Octopus
acting as Puppeteer
Keeping me upright
or let me stumble at will

I designed ‘Octopus’ as a glove puppet with the idea that I would be able to animate it myself. My Creative PA cut my patterns out of fabric my mother had given to me over twenty years ago. The suction pads on the tentacles are from my non-slip socks. The eyes I found in a box of old puppet eyes. The machine-sewing was done for me, but I all of the hand-sewing while in my recliner.

It is good to find new ways to create. ‘Octopus’ was initially a prop, but it took on its own life and perhaps became the story. I shared some of the images of ‘Octopus’ with fellow Severe M.E. sufferers and with others. Everyone related to the power of the imagery. An octopus is very intelligent and can learn tricks, a bit like M.E. which constantly changes and affects us in new ways, taking control over our bodies and over our lives, pressing a weight on our chest and heart, and messing with our brains.

During a short film trial my creative PA pinned ‘Octopus’ on my shoulder. We filmed while I drove out of my front door in my powered wheelchair. In the script it is noted that I will be replaced by one of ‘The Girls’ in her wheelchair as soon as I am outside of the gate. (I rarely get further) 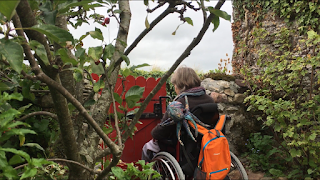 Although I know ‘Octopus’ was pinned to my clothes and not to me, it encroached on me. I felt utterly restricted in my movements. While filming a close-up, my assistant animated ‘Octopus’ slowly creeping over my shoulder.

The imagery is immensely powerful.
I can marvel at the creative achievement,
but it also makes me take deep breaths.

During another test shot ‘Octopus’ crawls out of the shadows towards ‘The Girl’ in her wheelchair in the garden. Octopus appearing behind the chair, tentacles creeping under the footrest of the puppet wheelchair puppet. ‘The Girl’  slowly slumping in her wheelchair. ‘Octopus’ is responsible for her inability to sit up for any length of time. 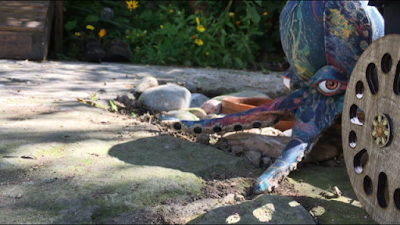 The eight tentacles of ‘Octopus’ also represent the different sides of dealings with the Irish healthcare system and care agencies.


We are pulled and pushed, our voices often taken away, or simply ignored, being pushed further into the shadows and further again into the darkness. Faced with the medical model of disability, there is simply no autonomy of care.

After many months of having to fight for sufficient care to remain living at home, the HSE decided on the home support hours I am now granted. A long fight, which cost me my health.

Initially the Care Agency sends carers, chosen by them, at a time that suits them. Although now, nearly two years on, I have a core care team with amazing carers. But we are regarded as ‘clients’ by the agency, and we are not directly involved in the decision regarding which carer comes into our own home, our private space. I do speak up, but the impact of having carers come into ones private space, I feel, is not always understood. Also, the not knowing in advance who will fill the weekend hours I find extremely difficult. I am still asking the HSE to have at least that autony of care. To have some control over Octopus.

When cracks appear in the provision of care, I feel the vulnerability, which increases the awareness of solitude, aloneness, and the minimal social interaction. And an issue of paramount importance is that because of my not fitting into the appropriate Disability Box, I am being denied the right to leave my home with the support of a carer.

Unlike the puppets of Life Outside the Box, the HSE firmly sits on the lid and I have no chance of escape.  The shadow of ‘Octopus’ becomes larger and darker, blocking out all light. The puppet is being left in the shadows; eventually in darkness.

Dealing with ‘Octopus’ is precarious.

There is a fine line between being in tandem with the pulling and the letting go of the strings ‘Octopus’ manipulates. Being slightly off-balance angers ‘Octopus’ and lands me in bed. Not listening to the signs could result in my hospitalisation.

Draft scene, based on experience: One of ‘The Girls’ is outside the gate in her wheelchair. She is delighted to meet her friends and neighbours. We intend on using puppets made by my past students, for this social scene. ‘Octopus’ rides on the back of the wheelchair, climbing on her shoulder. Always present.  ‘The Girl’ comes home after a very short outing, delighted but exhausted. A day later she becomes very ill and loses her ability to speak. The puppet is roughly lifted out of her bed by ‘Octopus’ and lands her into hospital.


Octopus pulling strings violently
Knocking me down
trapping my words
[……] 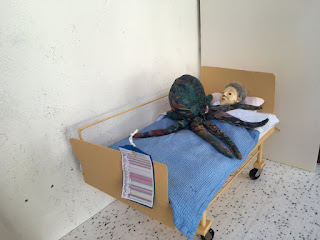 'Octopus' sits on the puppet’s chest as she lies in her hospital bed. Pinning her down. A clinical setting. Bed too high to step out of. Chart at the end of her bed. Drinks out of reach.

The vulnerability of illness.

After ruling out a stroke, my sudden dramatic deterioration is questioned by the medical team. “How is the form?” is a daily question. My explanation of physical symptoms and inability to sit up, to move my head without collapsing, and my inability to walk are not taken seriously.

The Functional Disorder Psychiatrist proceeded to draw a stick figure, a thought cloud and bolt of lightning. Advised I could simply think my illness away by positive thoughts, and not to listen to my body when it tells me to stop. He had no interest in seeing me. These senseless actions are hurtful and have a long-lasting effect on my mental wellbeing. ‘Octopus’ is part of a section of the medical profession which tries to take control over my life, disregarding my reality. 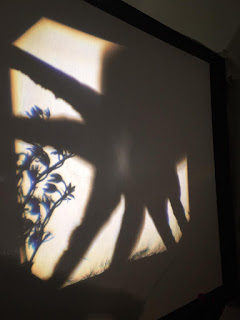 I disappear further
into the shadows
Into the reservoir
of darkness


To be explored in Next chapters: