"One of the most beautiful dreams of my life"


"And then we stood on the wall, held hands, and flew in one of the most beautiful dreams of my life."
Cecile Gilchrest

This is a story about Room 4 at the Dzogchen Beara Care Centre (Dechen Shying). A story of Into the Light. A story of friendship.

Into the Light found its format of a-book-in-a-box during my second stay at the Care Centre, room 4 and was inspired by the prayer flags. During the first stay I created three sculptures, which are still on display in the centre. Pages from Into the Light are displayed alongside them.

The following words are from Cecile Gilchrest, an American lady who made contact with me via email a month or so after the launch of my 'Into the Light' book at the Care Centre.:

"Very early in the morning I wrote a long letter to my dear friend who had accompanied me to Ireland and who stayed in the other quarters at the far end of Room 4. I  slipped it under her door to announce to her that the time for my long silence had begun and that it must last for the 8 days there at DZB. I knew she would understand, but still it was hard to write. I wrote that I had no real idea of what I hoped to accomplish but that I was going for “bedrock.
On the way back to my room I saw your book-box on the coffee table and took it with me to my room.

I had taken one or two of your cards from a hallway display by the three sculptures the night before and wrote the poems in my book.  One card that I remember was that one that explained the word “grave” as in serious or heavy.

It was raining hard that day and I’d not yet hung my prayer  flags on the bushes outside at the cliff’s edge in front of Room 4.  I did so in bare feet.  It was wet and a little chilly but I was “possessed” to get them hung before I could “dig for bedrock” whatever that meant.

At some point I opened “Into the Light”.
Ultimately it took me two days and about 6 hours at least to read through and ponder all of your words.  After just a few cards (back and front) I began to write to you, to myself, to my mother.  I don’t know if the cards began to feel like flags at that point or later.  I was enthralled by your work and its resonance within me.

Your thoughts released a knowing in me about the grief that I feel at having been diagnosed with an unusual cancer for which there is no known cure at this point: chemo and radiation failed by late 2014. I
I began, in the conservatory, to write my own feelings, many which echoed yours but in my voice. I began to write letters to myself with compassion and felt a sadness that my "good spirits" often mask for others and for myself.

It was Karin [care staff at centre] who, in a consult, listened to my story of the strong resonance with the author of 'Into the Light' and told me about you and showed me photos of the day when all the cards were hung like flags in the lobby of DZB.  How happy she was for us!

Once I knew this, I entered into conversations with you from my heart and even found us together in a dream about flying over the sea...right off the rampart where I hung the flags just outside the conservatory in a driving rain.  And then we stood on the wall, held hands, and flew in one of the most beautiful dreams of my life.

My last three full days at DB resulted in feelings of well being and self-knowledge as well as self-acceptance far greater than what I had/have experienced to date.

Karin was such a quiet blessing and her admiration and care for you were palpable and part of my own healing journey in and about the Care Center and enormously within the walls of Room 4. 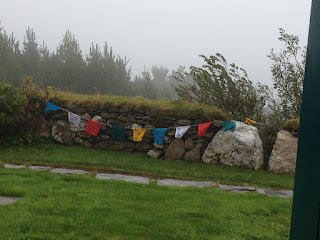 Footnote:
We are still in touch via email. A beautiful supportive friendship.
Room 4, has a special connection for us. I can feel Cecile's presence when I sit in the conservatory.
This is our story, which Cecile was glad to share with all of you.